Hydrogen-powered fuel cell electric vehicles will travel nearly 6,000km across Europe to converge in Hamburg to celebrate the expanding network of refuelling stations. Thirteen vehicles starting in five countries (Belgium, the Netherlands, Germany, Denmark and Norway) will travel a combined 5,836km to reach the German city ahead of the Hydrogen for Clean Transport – H2ME Mid-Term Conference on 25th October. The journey will demonstrate the advantages of hydrogen mobility and motorway driving.

The road trip to Hamburg is only possible following the expanding network of refuelling stations, in part due to funded installations from the pan-European Hydrogen Mobility Europe (H2ME) project that assesses the technical and commercial readiness of vehicles, fuelling stations and hydrogen production techniques. H2ME has funded the installation of 32 hydrogen refuelling stations (HRSs) across Europe to date, with a target of up to 49 by 2022.

The recently launched European HRS Availability System h2-map.eu shows the location and live status of 137 HRSs, with more than half of these available in Germany. The pan-European road trip to Hamburg comprises 15 HRSs; international standards ensure compatibility between refuelling stations and vehicles, and the refuelling process takes around three to five minutes, offering times comparable to conventional petrol or diesel cars, and reduces overall journey times.

As part of the H2ME project, hydrogen-powered fuel cell electric vehicles have travelled a combined distance of over 11.6 million kilometres. The milestone comes following the deployment of more than 550 hydrogen vehicles for private and business use across the United Kingdom, Germany, France, Scandinavia, and other European countries. This is becoming possible as an increasing number of car manufacturers are making available new-generation hydrogen vehicles today, or planning to make hydrogen vehicles available in the near future. The H2ME project has deployed partner FCEVs, including: the Toyota Mirai; Symbio’s new generation of the Renault KANGOO Z.E; Honda’s second-generation FCEV; and Daimler’s new-generation Mercedes-Benz GLC F-CELL. H2ME project partners AUDI and BMW have also announced plans for releasing small series hydrogen vehicles in the coming years. In total, more than 1,400 FCEVs will be deployed by 2022.

Findings from the H2ME project will be announced at the Hydrogen for Clean Transport: H2ME Mid-Term Conference in Hamburg. Taking a strategic approach in combination with renewable energies, Hamburg is seen as an early adopter for hydrogen fuel to reduce transport emissions. The event will showcase the advances made by hydrogen technology in the transport sector and discuss the remaining challenges of widespread commercialisation.

Bart Biebuyck – Director, FCH JU – “I am very excited to see this road trip happen, which will surely profit from the European HRS Availability System, our new tool that will help all car users identify existing refuelling stations and whether they are operational or not. This information, which is openly available to any user, will eliminate any anxiety over a lack of infrastructure and enable drivers to opt for fuel cell vehicles.”

Valerie Bouillon-Delporte – President, Hydrogen Europe – “Hosting the Hydrogen for Clean Transport Conference in Germany is a natural step given the successful infrastructure rollout. Today, there are 76 hydrogen refuelling stations across the country, and new stations opening every week! Hydrogen mobility, and its related infrastructure, is also being adopted in Austria, Denmark, France, the Netherlands, to name a few. The market is getting ready and the technology is proving its reliability; just consider the 6,000 kms driven across Europe to convey in Hamburg. More than anything else, the H2ME project, as an initiative co-funded by the FCH JU, demonstrates the true value of a European public-private partnership in building the sustainable mobility we are all striving for.”

Senator Michael Westhagemann – Hamburg Ministry of Economic and Transport – “Hydrogen makes a significant contribution to achieving climate targets, especially in mobility. Northern Germany has high quantities of renewable energy available, which is an optimal prerequisite to match the supply and demand of various sectors. H2ME shows the technical and operational readiness of hydrogen refuelling stations and how fuel cell vehicles can be used in fleets with great success. We thank the European Union for their excellent cooperation.”

Bertrand Joubert – Deputy Director-General, Symbio – “As a part manufacturer, specialising in hydrogen systems for transport, and a subsidiary of the Michelin Group, we fully support such an event: it demonstrates the accelerating deployment of hydrogen refuelling stations in Europe, which is a mandatory factor to build a strong European industrial hydrogen sector able to compete at a worldwide level.”

This €170 million demonstration project is co-funded with €67 million from the Fuel Cells and Hydrogen Joint Undertaking (FCH JU), a public-private partnership supporting fuel cell and hydrogen energy technologies in Europe. 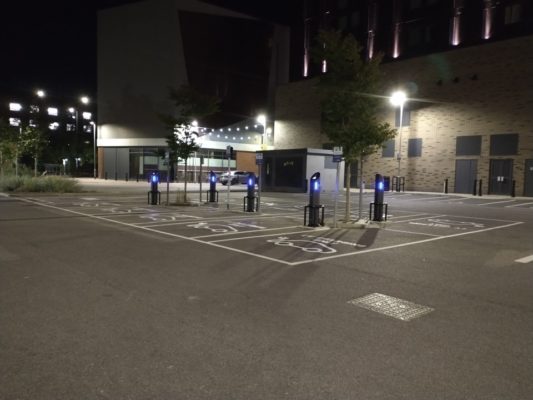