A UK-wide innovation project is exploring how vehicle-to-grid charging technology could make money for electric car and van owners and contribute to the decarbonisation of the energy grid.

With vehicle-to-grid (V2G) technology, electric vehicle (EV) batteries could store electricity – when there is an abundant supply – to power homes and businesses and discharge it back to the national grid when it is most needed.

This enables better use of renewable energy, lower carbon footprint, less pressure on the grid and financial savings, which can help electric vehicle owners pay back their investment.

The EV-elocity project has been deploying V2G chargers in a range of locations across England as part of large-scale trials to gain technical, customer and commercial insights on the emerging technology. It is also investigating if, and how, additional use from V2G charging may affect EV battery life.

“After restarting the project in mid-2020, we are delighted to be testing V2G with such a range of sites and hardware. We’ll be working hard over the coming months to examine the cost, carbon and conditioning benefits of V2G, and publish our results as they become available.”

The project, led by Cenex, involves the Universities of Nottingham and Warwick; Leeds and Nottingham City Councils; and CrowdCharge, a platform that integrates and optimises smart electric vehicle charges. It is funded by the Department for Business Energy and Industrial Strategy (BEIS) and the Office for Zero Emission Vehicles (OZEV), in partnership with Innovate UK, part of UK Research and Innovation.

“Cities saw a huge drop in CO2 levels during lockdowns and installing V2G technology could help to reduce emissions from transport and electricity production long-term while also improving energy system capacity and reliability and increasing consumption of locally-generated renewable power.

“At present, peak demand for energy is 5-8pm when most people are at home, but renewable sources, such as solar panels, generate most power when electricity demand is low. Therefore, there is an urgent need to resolve this disconnect and find a way to increase the grid’s capacity to store excess renewable power to reduce pressure on the energy system’s infrastructure.”

“Why invest in a battery for your home if you have a car with a battery? V2G enables us to optimise resources and make the most of our assets, rewarding us with financial returns and a reduced carbon footprint.”

With V2G technology, EVs could help to support grid resilience when parked and plugged-in. Instead of installing huge and expensive community battery stores, an extensive network of EV batteries could be harnessed to absorb energy when renewable generation is plentiful and export it back to the grid during peak demand when carbon intensity is highest for a profit, making money back for users in the process.

“Company cars and vans tend to earn money while out on the road, but electric vehicles could also be a source of income when they’re parked up. We know cost is a major factor deterring mass adoption of electric vehicles, but if V2G charging helps EV owners get a quick return on their investment, it could make purchasing electric vehicles a much more attractive option to a bigger customer base.”

Using data from V2G chargers and trackers in EV cars, and user behaviour analysis on the study, researchers are examining mobility patterns, EV charging requirements/trends, battery degradation, and electricity generation, storage and use.

“Understanding the patterns of vehicle usage will allow us to evaluate the best charging infrastructure required for EVs, for example the locations and type of charging points and plugs (which currently vary between car brands), compatibility with V2G, charging periods and energy demand, etc. This will enable us to rethink the system and inform the users’ decision-making process in order to maximise benefits for consumers and the planet,” Dr Waldron adds. 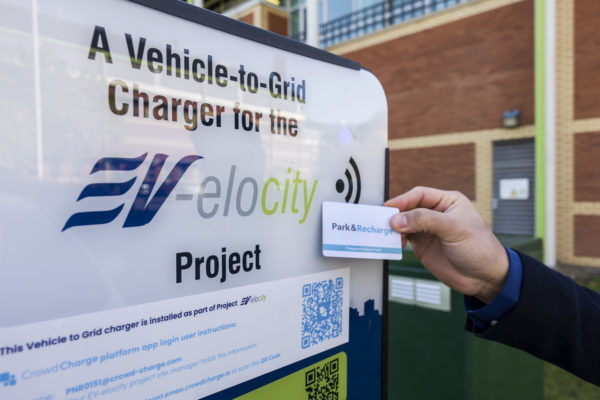 The 2020 pandemic provided a unique opportunity to assess...

‘A Vision for Micromobility in the UK’ covers perspectives...